A woman stands in field where clothes are dried after washing in a displaced persons camp in Metuge, Cabo Delgado province. Makeshift camps have formed after a series of attacks has forced thousands to flee the northern region. Mozambique, June 2020. © MSF
All news

The number of displaced people is growing in Cabo Delgado, northern Mozambique. In February, at least 200,000 people were displaced due to conflict that is growing in the area. Since then, numerous attacks on villages across the region have uprooted thousands more from their homes.

Armed groups are waging attacks in this complex, resource-rich region. Today, the north of Mozambique is the epicentre of social and economic tensions in the country, resulting in devastating consequences on the area’s people.

During an attack by insurgents on 28 May 2020, four MSF staff members were working at the health centre in Macomia just before it was ransacked and burned. That day, 27 MSF staff living in Macomia fled with the local people, dodging stray bullets as the combat intensified around them. No MSF staff members were killed during this incident, however the trauma they lived through remains very real.

All roads were blocked in and out of Macomia as insurgents entered the village. The only way to escape the erupting violence was to flee into the bush.

An MSF staff member describes the horror of being caught in the crossfire on 28 May.

“The only way to escape was through the bushes at the back of the hospital. I ran from the area when I heard shooting around Macomia. The entire town was running towards the bush.”

“We were at least a thousand people – men, women, the elderly, children, the sick and their caregivers – all running away from the sounds of shooting. It was like the end of the world.” 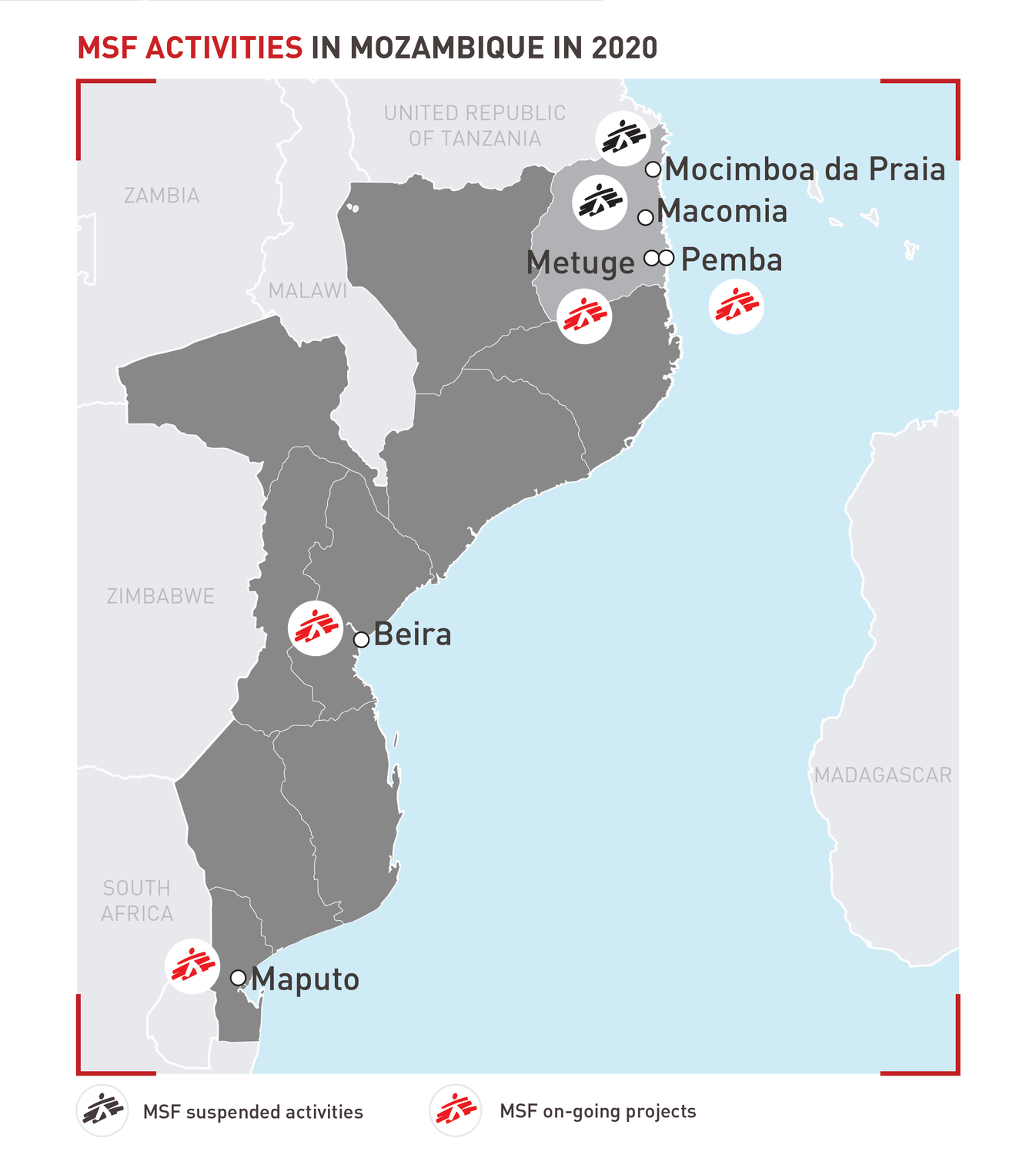 “People were running through thick forest – areas where no human had gone before. This was wild bush with a lot of thorns. People were thirsty and hungry, there was no water in that area – just stone and hills.”

“People were trying to stop and rest, but the helicopters were flying very close.”

“The road to Licangano wasn’t easy – there were numerous hills. It was up and down. Many old people, sick people, and kids could not manage to jump over the obstacles, or to climb the steep cliffs. Many kids were lost in the panic…”

“I saw a woman with a baby trying to get down the hill. She could not manage without help, so she left her baby above and lowered herself over the ledge. At that moment, heavy shooting started nearby. The woman was yelling for help – pleading for someone to pass her baby to her. No one could help her.”

Following the attack on 28 May, no official report provided the number of civilian casualties and wounded. MSF has received unverified reports of at least 15 dead, including multiple children, some due to starvation as they hid in the bush for days to escape the fighting.

We did not have access to the area immediately after the attack. Some of our staff were allowed back to survey the damage and begin reducing our presence, following the decision to suspend operations in Macomia due to the heightened security risks.

After Cyclone Kenneth ripped through the north of Mozambique in April 2019, we helped rebuild and renovate the Macomia health centre and medical lab. During the 28 May attack, that lab and health centre were completely destroyed.

The Macomia health centre provided vital medical services for the entire town of over 29,000 people. MSF provided support in the form of human resources: 27 people including nurses, a pharmacist, water sanitation and hygiene teams, drivers and guards.

Amidst an ongoing violent conflict, little access to health care and poor living conditions continue to worsen the daily struggle of thousands of Mozambicans in the north.

We are committed to supporting displaced people throughout the Cabo Delgado province. Our role is clear – to provide humanitarian and medical assistance to the people that need it most. To do so, MSF must guarantee a minimum amount of security for our medical teams, patients and the facilities that we work in.

It’s the most vulnerable people who will needlessly suffer the most – and we will do everything we can to lessen that suffering for the people who are caught up in this ongoing conflict.

Following continued violent attacks, MSF has suspended its activities in Mocimboa da Praia and Macomia. However, MSF continues to work in Cabo Delgado Province. Today, MSF is providing support to the Cholera Treatment Center in Metuge, having built two latrines and provided four nurses to respond to the increased needs and population size. Our teams are making assessments for future activities to support the response of local authorities, as the IDP population continues to grow in and around Pemba.

MSF has been present in Mozambique since 1984. In the city of Pemba, MSF is supporting health authorities in improving access to water and sanitation as well as responding to possible outbreaks of diarrhea and cholera. MSF is also present in Maputo and Beira providing care to people with advanced HIV, Tuberculosis, Hepatitis and vulnerable populations. Across all projects, MSF is supporting the Mozambique Ministry of Health in its response to COVID through the implementation of preventative measures including infection control, triage and surveillance.

As tens of thousands of people have returned to the town of Mocímboa da Praia over the past months, Médecins Sans Frontières/Doctors Without Borders (MSF) has established a medical project to assist vulnerable groups in the northern Mozambican district.

Mozambique: "We must always be on alert”

Agy Agy, 28, is a logistics supervisor with Médecins Sans Frontières/Doctors Without Borders (MSF) in Cabo Delgado, Mozambique. He explains the insights of preparing and carrying out relief items kits distributions in a fluid context, where recent violence and rumours of attacks have displaced more than 80,000 people since early June, the biggest wave of displacement so far this year in this northern Mozambican province hit by conflict since 2017.