The Rohingya people are one of the most persecuted minority groups in the world. Following a concerted campaign of extreme violence by the Myanmar authorities against Rohingya people in Myanmar’s Rakhine state in August 2017, nearly 700,000 Rohingya fled over the border into the Cox's Bazar district of Bangladesh.

In December 2017, surveys we conducted in the refugee camps found that at least 6,700 Rohingya were killed by violent means in Myanmar between 25 of August and 24 of September 2017. At least 730 were children under five years of age. 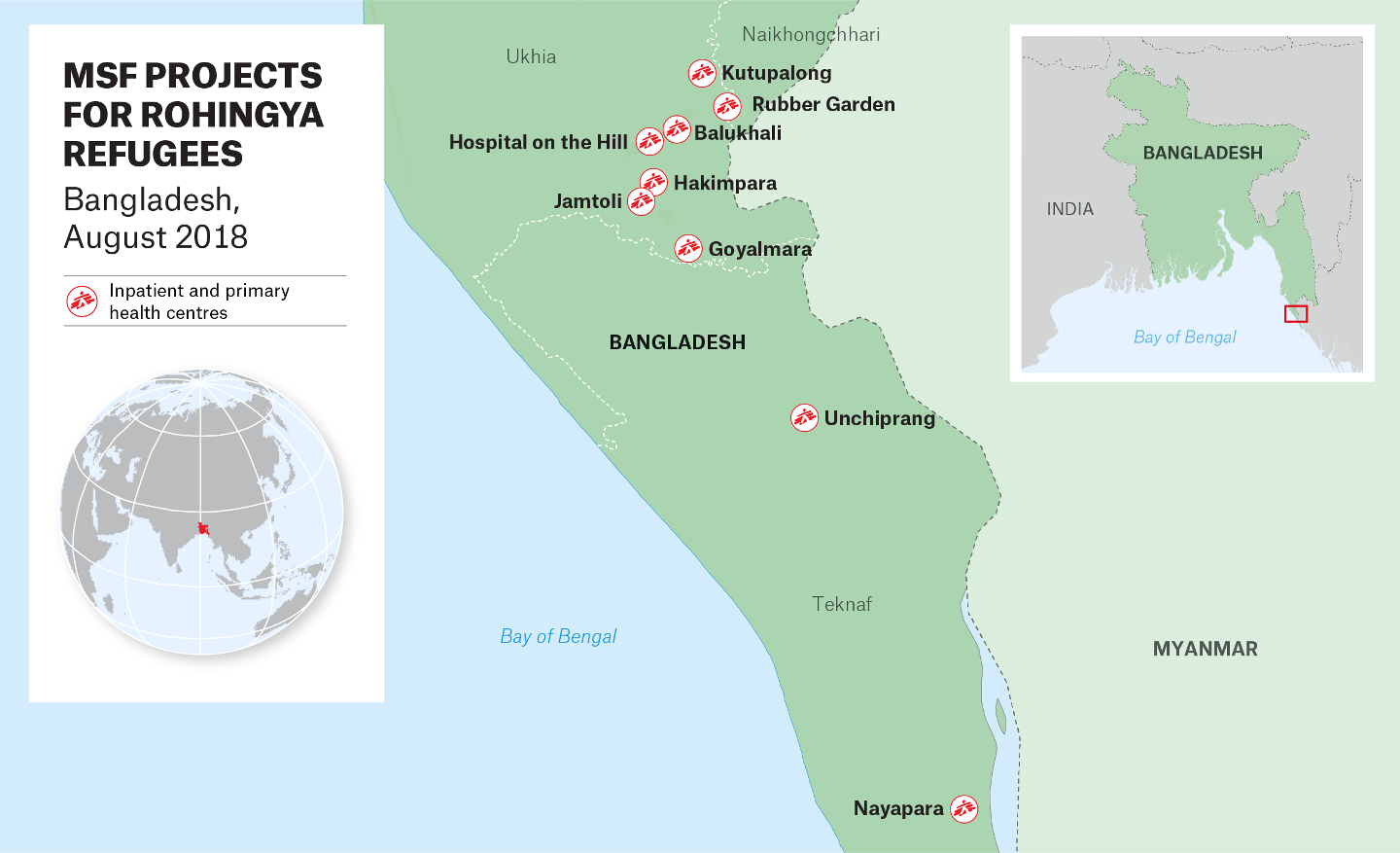 Living conditions in the refugee camps in Cox's Bazar, Bangladesh are dire. Many people lack access to clean water, sanitation, health care and shelter. Outbreaks of multiple vaccine-preventable diseases are springing up among the population.

We have significantly scaled up our existing medical, water and sanitation efforts in support of the growing needs.

In the 12 months since, MSF has provided over 656,200 consultations, equivalent to more than two-thirds of Rohingya refugees, in 19 health facilities or mobile clinics.

ROHINGYA CRISIS | "We see around 300 patients a day"

Rohingya refugees share their own stories of trauma and resilience with celebrated photographer Robin Hammond.

Story by Anaïs, head of the MSF surveillance team, who is monitoring the epidemiological situation in the large Rohingya refugee camp in Cox's Bazar district

Rohingya crisis one year on: “We are not stateless, we are from Myanmar”

One year after over 700,000 Rohingya refugees fled Myanmar, many remain trapped in a cycle of suffering.

Uprooted Rohingyas Hasina, Fatima and Mohamed were forced to flee Myanmar last year. Here’s what they have to say.

The Rohingya refugee camp of Kutupalong-Balukhali, an ever-expanding camp

“There just isn’t enough land available, the camp is too crowded.”

MSF opens an hospital at the heart of a vast camp

With capacity for 100 patients, the hospital was designed to respond to an emergency situation: the massive arrival of Rohingyas fleeing the violence in Myanmar that began on 25 August, 2017.

MSF medical team leader Carla Pla describes the challenges of treating the disease amongst the refugee settlements of southeastern Bangladesh.

Three Rohingya refugees recount their lives before, during and after the journey to Bangladesh.

Diphtheria, a disease long forgotten in most parts of the world, is now reemerging in Bangladesh, where more than 655,000 Rohingyas have taken refuge.

At least 6,700 Rohingya were killed during the attacks in Myanmar

Surveys conducted by MSF estimate that at least 9,000 Rohingya died in Myanmar, of which 71.7% were caused by violence.

Rohingya refugees in Bangladesh: a community on the brink of disaster

"If the situation does not improve rapidly, the public health emergency we are facing will escalate dramatically."

Rohingya crisis: "having four people die my first day was a shock"

"Rohingyas are in survival mode"

"It’s hard to comprehend the magnitude of the crisis until you see it with your own eyes."

More than half a million Rohingya refugees have arrived in Bangladesh following a wave of targeted violence.

"If this is the better option, the other must have been a living hell"

Refugee camps in Bangladesh in critical conditions after the arrival of 500,000 Rohingya refugees.

A massive scale-up of humanitarian aid in Bangladesh is needed to avoid a massive public health disaster following the arrival of hundreds of thousands of Rohingya refugees.

International humanitarian access to Rakhine state must urgently be permitted

Rohingya refugees fleeing to Bangladesh urgently require medical and humanitarian assistance, as an already dire humanitarian situation along the border with Myanmar worsens.