On the run from violence in Zamfara state

Displaced children playing in the hallway of an abandoned ruin used for shelter by Fulani families. Nigeria. 2019. © Benedicte Kurzen/NOOR
All news

On the run from violence in Zamfara state
Get involvedDonate now

Criminal groups and extreme violence in the northwestern state of Zamfara, Nigeria have caused hundreds of thousands of people to flee their villages and seek shelter in the town of Anka.

Muhammad* does not speak. The little boy stands forlornly in a wide, stony field on the construction site of a new palace for the Emir of Anka.

The construction is on hold and hundreds of people displaced from villages in Zamfara state are living in unfinished buildings, or shelters built on the site by MSF. 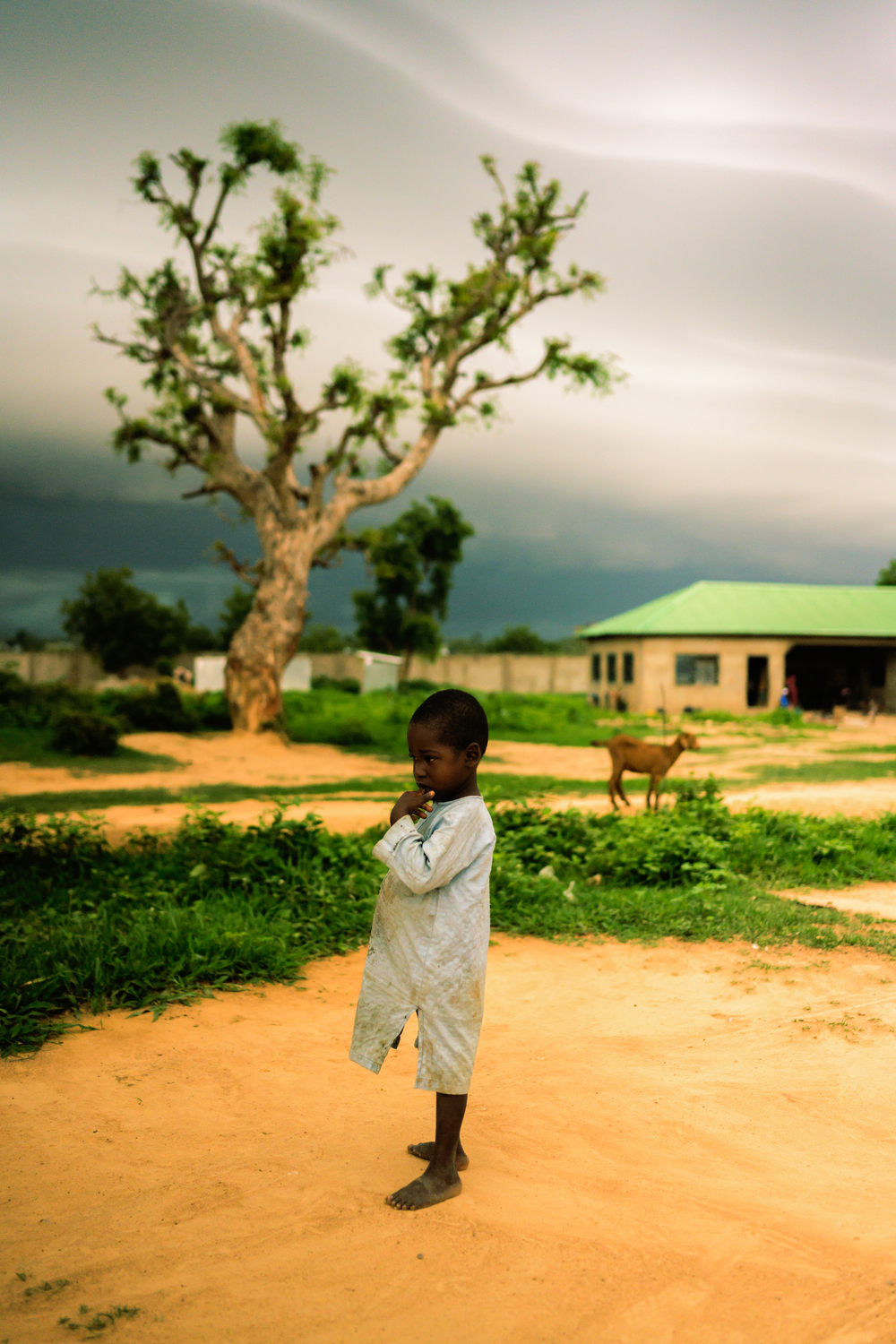 “Muhammad’s village, like all the villages of the people here, was attacked and destroyed by armed gangs,” says Anja Batrice, an MSF doctor. “We think it was those experiences that made him so withdrawn.”

Anja points out that the displaced people there have lost everything.

“The deadly attacks forced them to flee their villages, leaving all their belongings behind. Now they live in makeshift shelters on the construction site and in school buildings,” she says.

“People are ashamed of their poor living conditions here. That's why our teams try to show them that they are still human beings like you and me. Especially our Nigerian colleagues, who speak the local language, joke with them and play with their children.”

It's the rainy season in Zamfara, which means a peak in malaria cases. Malaria is the most common disease treated at MSF's paediatric ward inside Anka’s general hospital.

In the damp weather, the malaria-spreading mosquitoes are thriving. Anja and her team of doctors and health workers run a permanent tented clinic on the site of the Emir’s palace. The medical team is equipped to carry out basic diagnoses and treat minor ailments.

From May to September this year, MSF’s Nigeria emergency team carried out 12,677 outpatient consultations for internally displaced people in Anka town.

Between April and June, just over 1,000 families benefitted from distributions of non-food items, including cooking utensils and personal hygiene products.

Forced to flee from violence, abductions and killings

Ten-year-old Aisha* was brought to the tented clinic by her mother, Zuwaira*. A rapid blood test confirmed that the little girl had malaria.

Seven months ago, Zuwaira, Aisha, and the rest of their family fled their home in a village near Anka, after repeated attacks by armed men, who demanded money and threatened them with violence.

“We brought them money, but they said we were lying and must have more,” says Zuwaira. “They threatened to kill us if they found we were hiding any more money from them.”

“One time they abducted three young men,” says Zuwaira. “We didn’t hear from them for a very long time. We know now that they were killed.”

Many men in their village, including Zuwaira’s husband, earned a living by mining for gold. The artisanal gold mining  around Anka often leads to land contamination, causing lead poisoning, especially in children. Two of Zuwaira’s children suffered from lead poisoning.

“MSF treated our children when they got sick from the lead. Now they are better,” Zuwaira says.

The medicine Aisha received at the MSF clinic seems to have had an effect. Yesterday, she lay sick and drowsy on the floor of the tented clinic; today she is back playing with the other children in the yard.

“I hope they will all be able to return to their villages at some point,” says Anja Batrice. 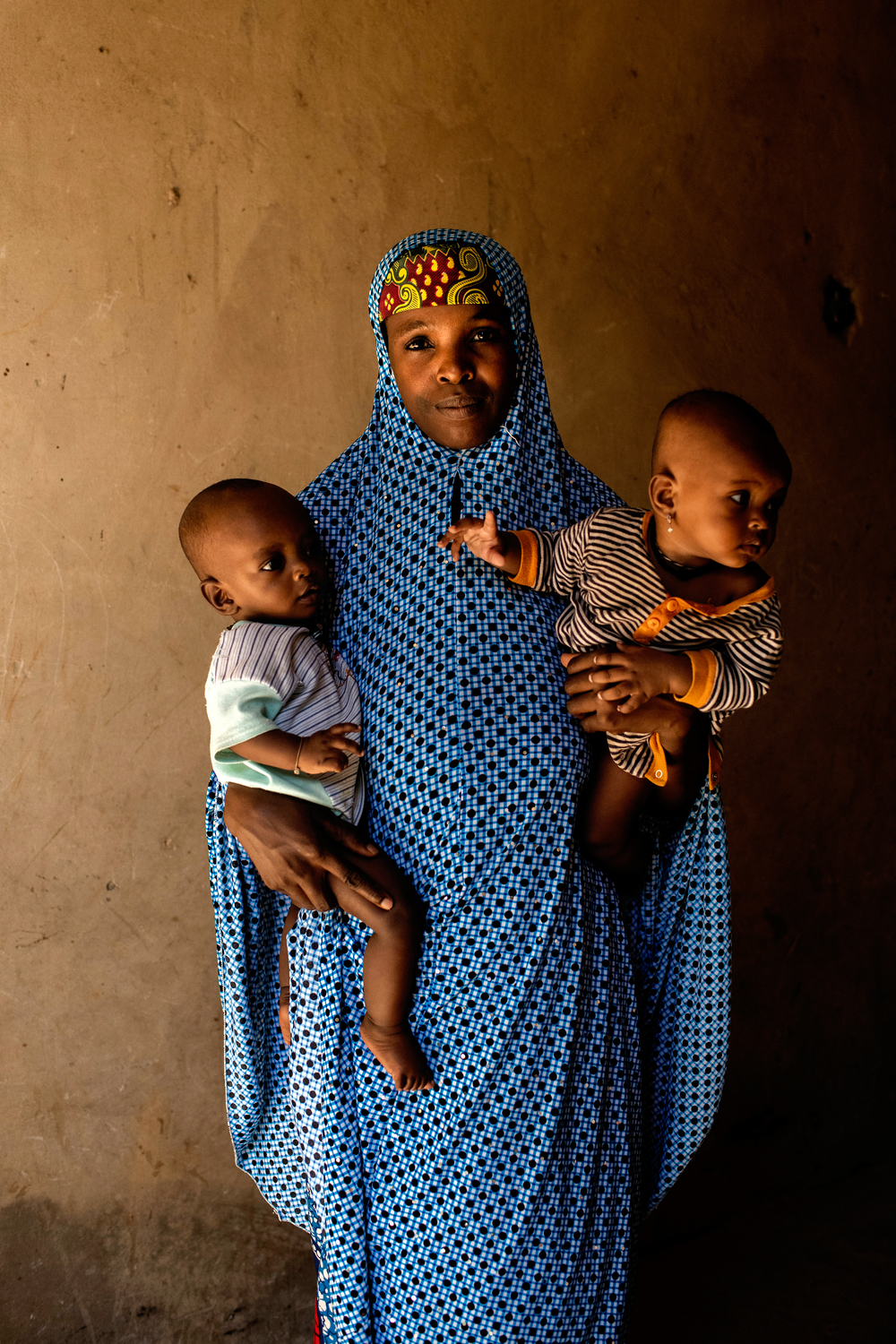 Amina, 30, carries her twins in the abandoned building where she lives. Nigeria. 2019. © Benedicte Kurzen/NOOR

Set back from the main building where Aisha and her family live are two overgrown ruins. They shelter a couple of families who prefer to keep to themselves. While most displaced people in Anka belong to the Hausa ethnic group, these families are Fulani – members of a tribe of cattle herders who are often nomadic.

Thirty-year-old Amina Alh Shehu has been living in one of the ruins for more than three years – proof that the insecurity in northwestern Nigeria is not just a recent phenomenon.

MSF teams have been treating children for lead poisoning for the past decade in the Anka area. In 2018, 337 children were treated. Previously, the teams would drive to remote villages to find and treat the sick children, but in recent months, the threat of abductions and violent robberies has made this impossible.

Seeking a roof over their heads

Aisha and her mother Zuwaira are now living in an abandoned school building. Half of the rooms in the grey concrete structure have no roof. With heavy rain falling most days, repairs are urgently needed if the dozens of families who live there are to stay dry.

In the open courtyard, a large puddle of stagnant water has formed – an ideal breeding ground for mosquitoes. In conditions like these, it’s no wonder Aisha fell sick with malaria.

One of the daughters of Amina’s husband was abducted when she returned to their village to give birth to her first child.

“She was seven months pregnant when armed gunmen abducted her,” says Amina. “We had to pay 1,000,000 Naira (2,520 euros) in ransom. We had to sell a lot of cattle to pay it. Our cows, goats and chickens used to be our security for the future – if something bad happened, we could sell them. Now we don’t have that security anymore.”

Amina’s husband is away, searching for grazing areas for what is left of their herd of cattle. He is currently near the village from which they fled, at constant risk of being attacked and robbed.

With the main source of her family’s livelihood gone to pay the ransom, Amina now struggles to feed her children. Her two youngest, twins Hassana and Husseini, were born five months ago in this ruin. Husseini has already been treated for acute malnutrition by MSF.

Three children to a bed

At Anka general hospital, where Amina brought her son Husseini some months ago, MSF runs a 135-bed paediatric ward.

Most of the children here are being treated for malaria, malnutrition and respiratory tracts infections, while others need intensive care.

Because the hospital is running at full capacity, children often have to share beds. During peak season for malaria, there are sometimes three children to a bed. With family members often sleeping at the hospital too, it can get very noisy and crowded.

At the hospital, Husseini received therapeutic food and was eventually strong enough to be discharged. However, feeding the two babies is still a challenge, says Amina.

“I don’t have enough breastmilk for both children,” she says. “The doctors gave me medicine to help me with the breastmilk, but it’s not working. Now I buy formula milk, which is very expensive.”

As well as malaria, having too little to eat is an increasing health risk for children in the area. From January to September 2019, our teams in Anka treated 7,445 children for malnutrition.

“The high number of children we treat for malnutrition in Anka has worrying implications for the situation in the rest of Zamfara state,” says MSF’s Dr Valerie Weiss, who supervises the high dependency unit.

“With such high numbers here in Anka, we also have to expect many cases of malnutrition in areas where we cannot go due to security concerns.”

In the northern part of Zamfara state, the few functional hospitals are overwhelmed by the number of patients, coupled with the lack of basic medical supplies. In addition, most of the remote villages are inaccessible and the provision of primary health care to the local communities is severely disrupted by the ongoing violence.

In September, MSF teams ensured an emergency assessment in Zumri and Shinkafi, two areas that have been particularly affected by the outbreak of violence. In Zumri, in only one day of screening, the team found 73 children suffering from acute malnutrition, including eight presenting medical complications.

MSF is collaborating with the local health authorities to start providing emergency nutrition support in these locations.

* Names have been changed to protect the patients.

Nigerian photographer George Osodi has been to Katsina State to document the ever-deepening food crisis in northwest Nigeria. Osodi’s photos offer a rare glimpse into a remote region where Médecins Sans Frontières teams continue to treat thousands of children suffering from malnutrition.

A growing, yet largely ignored, malnutrition crisis is unfolding in northwest Nigeria, which threatens the lives of tens of thousands of children, the medical humanitarian organisation Médecins Sans Frontières /Doctors Without Borders (MSF) warned today.