People survey the burnt-out remains of buildings and shelters in Nguigmi, Diffa region, following violence, including suicide attacks, in the town on 26 March. Niger. March 2019. © Souleymane Ba/MSF
All news

At least 30 civilians killed in four days. Dozens more wounded. Some 380 houses burned to the ground or destroyed. Kidnappings, assassinations and cross-fire. Latest critical incidents in Nguigmi and other locations in Diffa, between 23 and 26 March, have left a trail of destruction and psychological trauma.

The worsening conflict around Lake Chad is taking an increasingly heavy toll on local communities, internally displaced and refugees in southeastern Niger. Thousands have been uprooted again recently, and the humanitarian situation keeps deteriorating as people’s need for assistance has outgrown relief actors’ capacities.

Boulama, a Nigerian refugee living in Nguigmi, is recovering from terrible losses: “We heard explosions and thought it was nothing. But then I saw a person coming towards me, and I screamed so that my wife could take our children and escape.” Unfortunately, their 7-year-old daughter got killed by the fire. “Our community is in mourning. We need all possible support, food and shelter as we have lost children and belongings. I am a tailor, I earn a living by sewing, but my machine is burnt.” 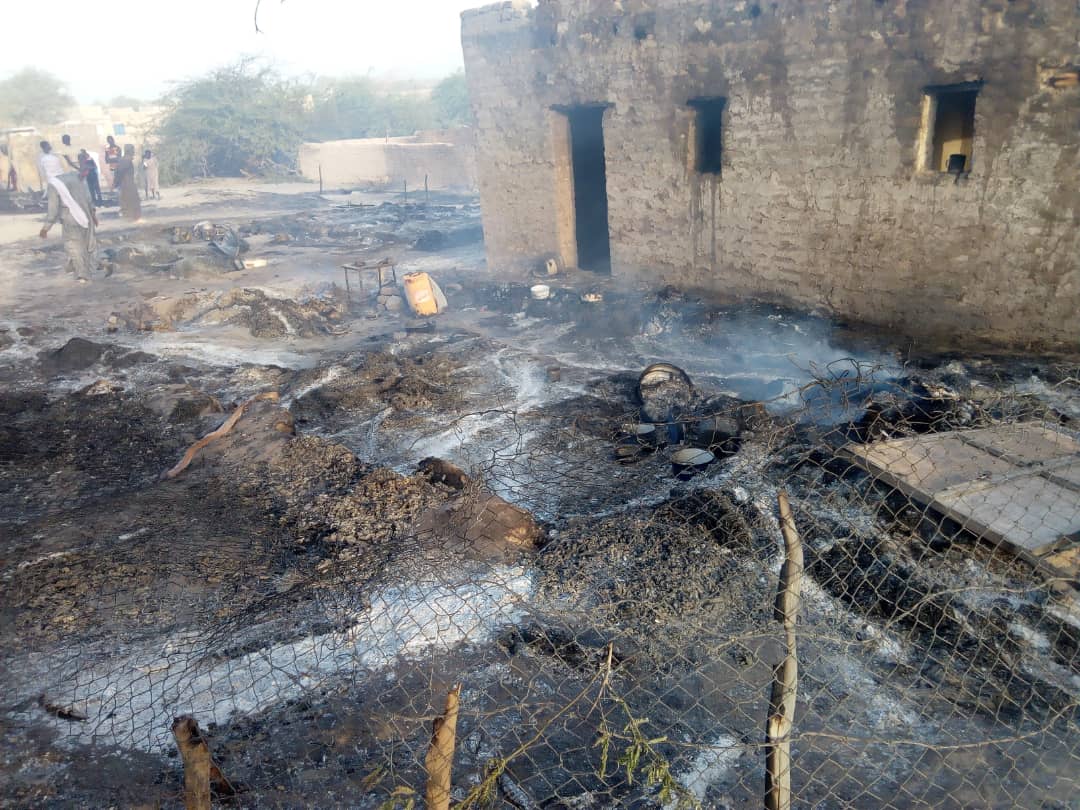 Recent attack in the village of Nguigmi following a series of violent episodes in this region. A large number of houses were burned down. Niger. March 2019. © Souleymane Ba/MSF

Eyewitnesses and local authorities from Nguigmi reported that two people carrying improvised explosive devices blew themselves up in two different locations of the town on in the evening of 26 March. At the same time, several gunmen allegedly set fire to makeshift shelters and tents in camps for internally displaced and refugees, who saw their homes and personal effects reduced to ashes. This was just the latest of a series of violent episodes in the region, as escalating volatility is intensifying people’s suffering and forcing many to flee.

Previous attacks had also prompted hundreds to leave their villages behind. On 23 March, for example, armed groups killed 19 people in the villages of Nguagam and El Mainari, setting fire to buildings. A mosque, the market as well as houses and shops were destroyed, and animals burned. On the same day, two fishermen were slaughtered in Chetimari Gremahartori.

According to the Office for the Coordination of Humanitarian Affairs (OCHA), in March over 90 people were killed in the Diffa region. Furthermore, 15,000 newly displaced people have been registered. Most are now living in precarious conditions. 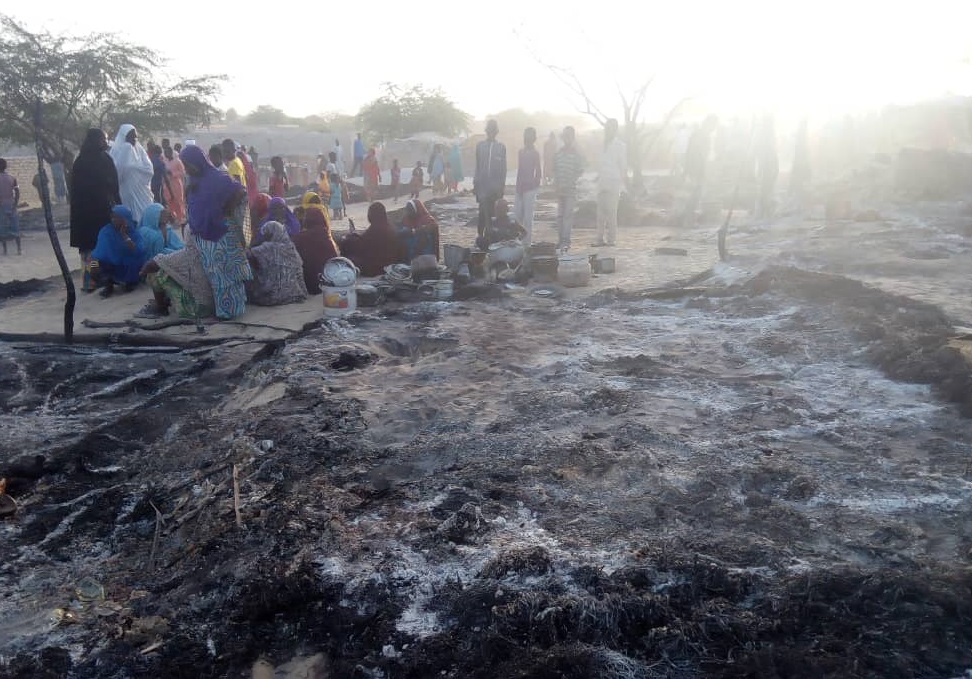 Residents of the village of Nguigmi gathered between the remains of their burned houses. Niger. March 2019. © Souleymane Ba/MSF

“What happened was a shock for us: losing parents, children, belongings… I’m having nightmares because I was the one who collected the burned corpse of my father. My children are traumatised and cannot sleep.” Malam Issa, from Nigeria, was also living in Nguigmi and is very concerned about the future. “I am overwhelmed. I don’t know how I will manage to survive as a labourer with my wife, my children, my mother, my stepmother and my younger brothers. Security is not guaranteed, and we don’t have food or shelter. Only the people who come to express their condolences give us some money.”

Following recent attacks, teams from MSF stepped in to support the treatment of the wounded at Nguigmi hospital, evacuating the most severely injured to the regional hospital in the town of Diffa in three ambulances and another MSF vehicle.

“My husband was injured by Boko Haram on the night of the attack and was transferred to Diffa by MSF because of his wounds,” says Atchagana, a 30-year-old woman from Nigeria, who fled to Niger on foot with her family to escape violence by armed groups, and is now living in Nguigmi. “We are worried about his health condition, and because we lost everything in the fire: mattresses, clothes, food… This situation is distressing us. My children and I are having nightmares because Boko Haram may come back at any time.”

MSF teams have distributed essential relief items including mosquito nets, jerry cans, kitchen utensils, blankets and hygiene items to 380 families (some 2,200 people). Our psychologists offered immediate mental health support for children and adults, organising individual and group psychosocial sessions for nearly 400 people. They found that many were struggling with depression, insomnia and other symptoms linked to the traumatic experiences they had undergone.

In addition, MSF teams provided similar assistance to people affected by the recent fires in Toumour, while water and sanitation teams are constructing 100 latrines for some 400 households in areas struck by the conflict.

“People are resilient, but many are on the edge: facing multiple deprivations and mental health problems,” indicates Souleymane Ba, MSF project coordinator in Diffa.

Some fled their country of origin and find themselves at increasing risk here; others were living peacefully in the region until the conflict began and now live in permanent fear. Recurrent attacks by armed groups have deepened the humanitarian crisis in Lake Chad. The current state of affairs is dire.
Souleymane Ba, MSF project coordinator in Diffa

MSF teams continue monitoring the situation and are ready to offer additional help if need be. Other aid organisations are providing assistance too.

However, considering the scale of the crisis, an increased mobilisation is urgently required to meet people’s needs for food, shelter, clean water and sanitation, among other priorities.

MSF first worked in Niger in 1985. We are currently working to reduce child mortality and improve the quality of paediatric care, while expanding our assistance to victims of violence and displacement across the country. We also facilitate access to quality medical services to people on the move, including migrants, who are often at risk of abuse and exclusion. Our teams also respond to disease outbreaks and support health authorities in enhancing immunisation coverage to protect against diseases such as cholera, measles and meningitis as needed.

Approximately two thousand migrants are expelled from Algeria and Libya every month on average, including people with severe injuries, rape victims, and people suffering from serious trauma. Upon expulsion, these migrants are abandoned in the middle of the desert at the Algerian-Nigerien border, at a place called "Point Zero", 15 km from the town of Assamaka.

On 18th February, an airstrike hit a small village in the Madarounfa district of southern Niger, killing at least 12 people, including four children, and injuring 16 others, according to local sources. Médecins Sans Frontières (MSF) teams operating in the Madarounfa district hospital supported Ministry of Health teams, in particular by providing medical supplies, to treat seven injured children.