It has now been two months since Hurricane Matthew devastated southwest Haiti, and thousands of people are still without adequate food, safe drinking water and shelter. 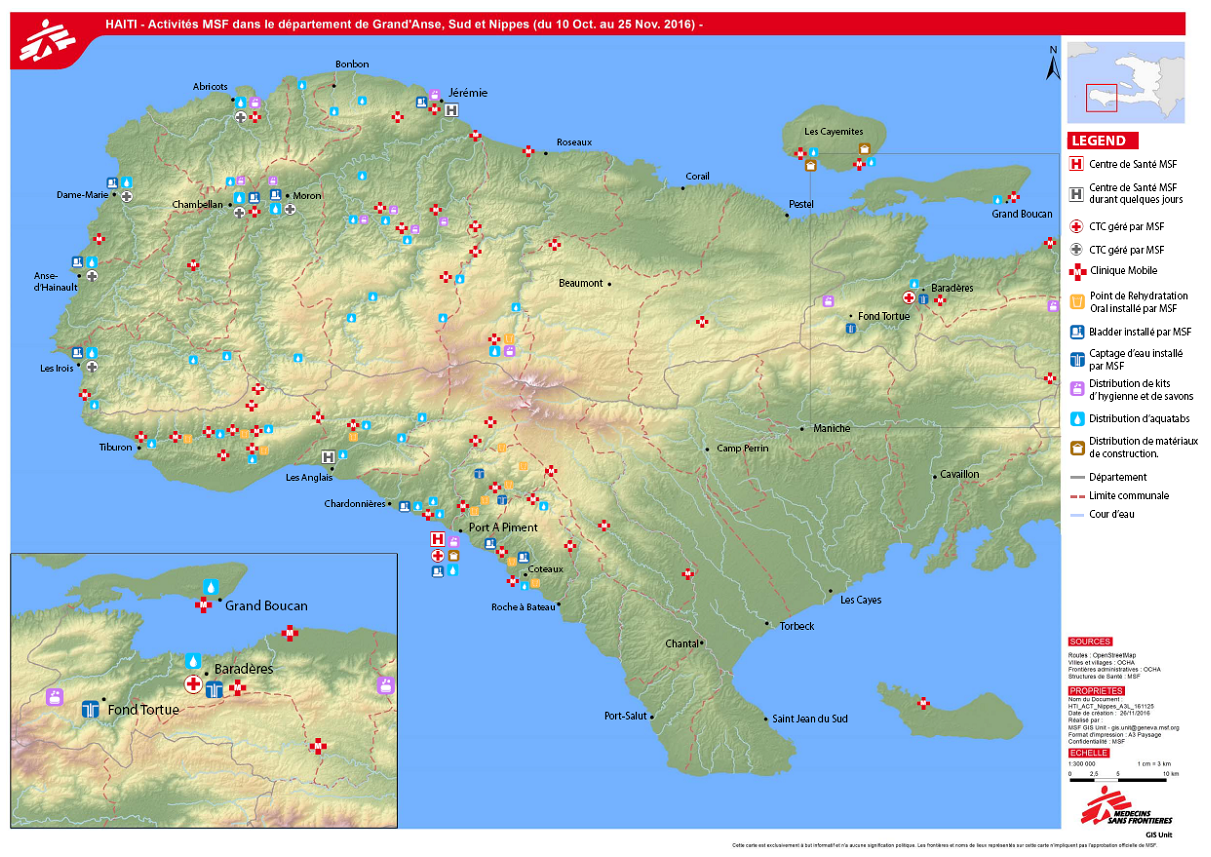 Médecins Sans Frontières (MSF) is concerned about the deterioration of living conditions, particularly in the departments of Grand'Anse, Sud and Nippes, all of which were affected by the hurricane.

In the Sud and Grand'Anse departments, MSF has set up mobile clinics to assess the general health of children living in the area. Chiara Burzio, the MSF medical coordinator, said that in the last week MSF mobile clinics had "examined and treated 163 children under five who presented with respiratory complications, 60 per cent of whom were suffering from upper respiratory tract infections and 5 per cent of whom had pneumonia or bronchitis". These complications are mostly related to a lack of insufficient shelter, in addition to cold nights spent in the mountains. The other children who came to the clinic had diarrhea and skin infections caused by inadequate access to clean water.

Accessing safe drinking water was already a problem for most Haitian communities, and it only worsened in the wake of the hurricane. Pipe networks were destroyed, and water reservoirs filled with sand. Stuart Garman, the MSF project coordinator, explained that "the lack of actors working to improve water and sanitation in Baradères after the hurricane forced MSF to take emergency action to repair the water supply network and distribute Aquatabs to 10,000 families living in the area". We had been working in the area since 2010 treating cholera.

Many families who lost their homes in the hurricane are still living in temporary shelters such as schools, and they face pressure from local communities who are demanding that authorities evacuate the structures. With nowhere to go, these people need a long-term housing solution.

In the last week, MSF’s Cholera Treatment Centre in Port-à-Piment has admitted seven new patients per day, some of whom have come from neighbouring areas to seek care. This is a spike in new cases compared to the last three weeks of November. Patients arrive at the oral rehydration centres that MSF opened in the mountains and are then transferred to the cholera treatment centre in one of two special ambulances.

On 4 October, a 20-bed cholera treatment centre was opened by MSF and the Ministry of Health in Baradères, Nippes. Since then, MSF has treated more than 190 cholera patients in the Port-au-Prince metropolitan area, and one of its monitoring and rapid response teams is currently stationed on the Island of Gonave to respond to the increase in cholera cases and deaths.

Recently though, MSF teams have begun to close the emergency projects they opened two months ago in Nippes. Fortunately, the cholera epidemic never developed as measures were taken to prevent it.

What has MSF done in seven weeks?

The number of people testing positive for the new coronavirus in Haiti has spiked dramatically from 100 cases, to more than 2,600, with 50 people dying, in the space of less than three weeks. In response to the growing spread of COVID-19 in the country, MSF opened the Drouillard treatment centre in the capital, Port-au-Prince, on 16 May, to care for people with severe cases of the virus.

Health structures are on the brink of collapse