Over 8,000 people displaced by armed group on Mali border

A woman sits under a basic, makeshift shelter in an improvised camp near the village of Kongokiré, Tillabéry region, Niger, February 2019 © Innocent Kunywana/MSF
All news

Over 8,000 people displaced by armed group on Mali border
Get involvedDonate now

More than 8,000 people have been forced to settle in improvised camps around the village of Kongokiré, Tillabéry region, Niger, where they live in appalling conditions, in a zone which is also considered as insecure. MSF has intervened with essential relief items, medical and mental health aid, and water and sanitation activities to cover the most pressing needs.

The two informal sites currently host about 10,000 people: Malian refugees who have fled due to mounting insecurity, and internally displaced Nigeriens, most of whom had already been displaced at least twice by persistent threats from armed groups and by difficult living conditions.

The displaced have reached Kongokiré, in western Niger, with little or nothing. They stay and sleep in makeshift shelters made of sticks, straw, plastic bags and cloth, and lack access to safe water and sanitation.

To respond to this alarming situation, MSF has distributed 1,173 non-food item kits which include mats, blankets, mosquito nets, tarpaulin, jerrycans, soap and basic cooking utensils, targeting 8,211 internally displaced people (IDP) and refugees. Our teams are also building latrines to improve the sanitation conditions in the area. 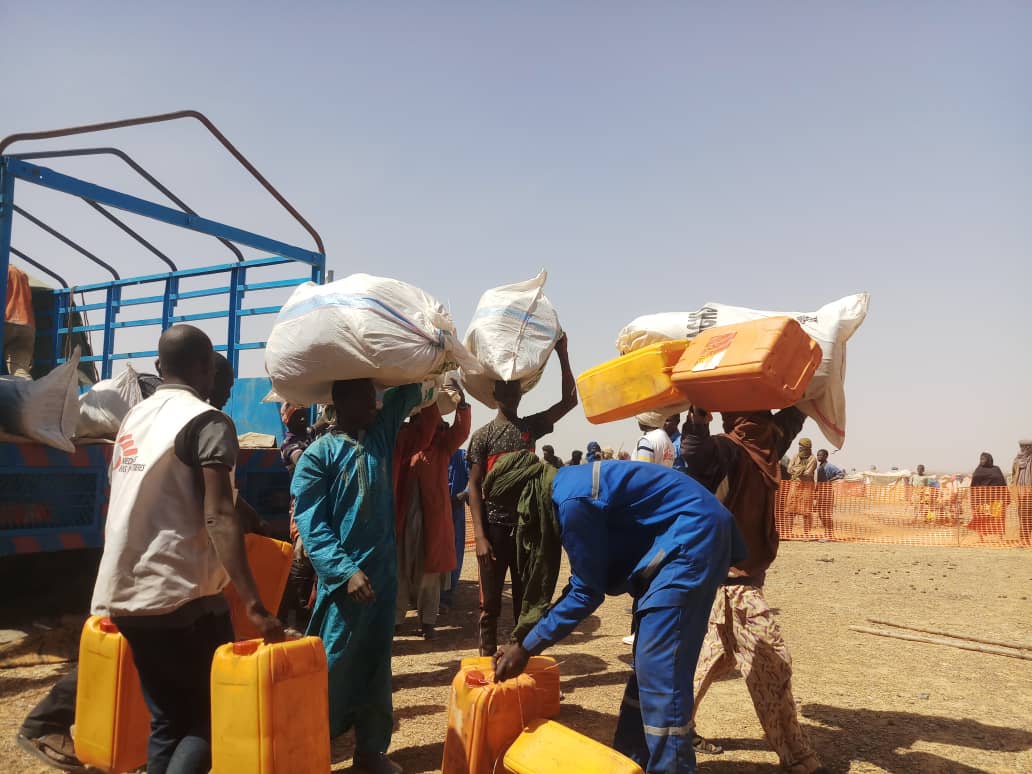 MSF is providing water and relief items  to cover the most pressing needs in the improvised camps around the village of Kongokiré, Tillabéry region. Niger. February 2019 © Innocent Kunywana/MSF

We are running mobile clinics directly in the camps to provide vulnerable people – who have had difficult access to preventive healthcare for years – with basic medical aid. In addition, we are supporting a nearby health post to facilitate access to care for both displaced and local populations. This assistance is accompanied by mental health consultations.

“Many of the displaced in Kongokiré have already been forced to flee several times. We can see signs of trauma in their behaviours, and hear them in their words. Many refugees and IDPs say that they cannot envision a return.” says Innocent Kunywana, coordinator of the MSF rapid emergency response team that is providing aid in the camps.

The situation in the region keeps deteriorating, and as long as there is insecurity, there will be no guarantee of safe return for these people.
Innocent Kunywana, coordinator of the MSF rapid emergency response team

“One of the main risks currently faced in the camps is lack of food,” says Innocent Kunywana. “If the displacement continues for a while – which is what we expect to happen – this may generate tensions between local populations and the displaced, and even fuel conflicts within the camps.”

Mobilisation of other organisations is critical to covering the unmet needs in food and protection. So far, the humanitarian presence in Tillabéry, and especially in the zones where insecurity is very high, has been insufficient.

MSF is worried that the situation in the region may spiral, as Tillabéry is affected both by the conflict in Mali and the surge of armed groups in Burkina Faso, and these root causes of insecurity and displacement will likely persist.

In addition to emergency interventions, in Tillabéry MSF supports two health centres and 6 health posts in the districts of Banibangou and Ayorou. Before the arrival of MSF, medical activities in these zones had been limited due to insecurity. In collaboration with the Ministry of Health, our teams facilitate access to healthcare to local and displaced populations. In January, MSF treated 4,789 patients, conducted 427 antenatal consultations and vaccinated 687 children under two.

Approximately two thousand migrants are expelled from Algeria and Libya every month on average, including people with severe injuries, rape victims, and people suffering from serious trauma. Upon expulsion, these migrants are abandoned in the middle of the desert at the Algerian-Nigerien border, at a place called "Point Zero", 15 km from the town of Assamaka.

On 18th February, an airstrike hit a small village in the Madarounfa district of southern Niger, killing at least 12 people, including four children, and injuring 16 others, according to local sources. Médecins Sans Frontières (MSF) teams operating in the Madarounfa district hospital supported Ministry of Health teams, in particular by providing medical supplies, to treat seven injured children.