Our activities / MSF in the world / Brazil
Get involvedDonate now 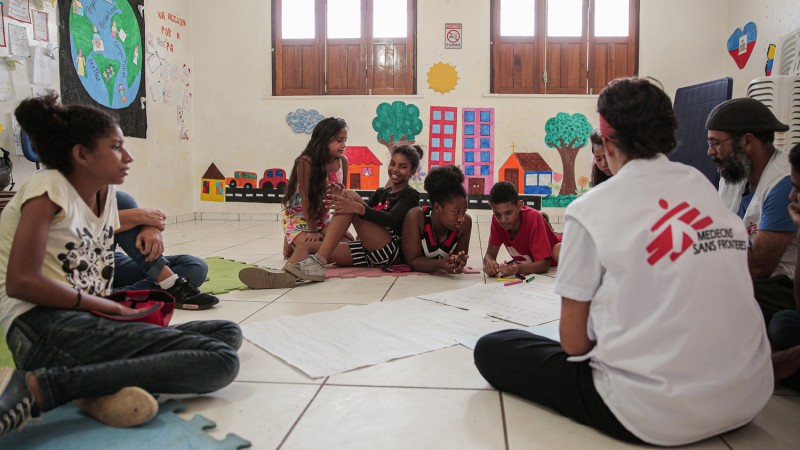 Tens of thousands of Venezuelans have crossed into northern Brazil, seeking refuge from the political and economic crisis that is ravaging their country.

The crisis has generated the largest human displacement in Latin America’s recent history, with approximately 4.5 million people having fled the country. Most Venezuelans entering Brazil arrive in Roraima, the least-developed state in the country, putting an additional strain on its already precarious public services. In 2019, due to the large influx of refugees, its population rose by five per cent, by far the highest rate in the country. The state now hosts between 50,000 and 60,000 Venezuelans.

MSF returned to Brazil in 2018, to address the health needs of Venezuelans and the local population in the state capital, Boa Vista. Our work includes health promotion activities and mental health sessions in official shelters, which are home to around 6,000 migrants and refugees. We also carry out water and sanitation activities, such as the distribution of hygiene kits.

By June, we had expanded our activities to include the provision of basic medical services and antenatal care in two health facilities run by Boa Vista city government. By the end of the year, our teams had conducted almost 7,580 outpatient consultations, including nearly 500 antenatal consultations, and reached over 18,000 people through health promotion activities. MSF is also the only organisation offering mental health assistance to Venezuelans in Roraima – over 3,500 people benefited from individual or group mental health sessions in 2019.

By the end of the year, our teams were also visiting informal shelters and abandoned buildings, as part of the strategy to reach the most vulnerable people in Roraima.

More than 12 months into Brazil’s Covid-19 emergency, there is still no effective, centralised and coordinated public health response to the outbreak.

Coronavirus COVID-19 has caused the health system in Manaus, the capital of Brazil's Amazonas state, to collapse, forcing city hospitals to stop receiving serious patients from other towns.

Brazil has the second highest number of Covid-19 related deaths in the world. Abandoned by the federal government and excluded from health care systems, the indigenous population is particularly vulnerable to the disease.

Covid-19: “We are concerned about the South”

Dr Jo Robays, coordinator of LuxOR, has just returned from a one-month mission with Médecins Sans Frontières to Brazil, one of the countries hardest hit by the coronavirus epidemic. It has already killed more than 75 000 people there.

Brazil’s COVID-19 nightmare is far from under control

MSF responds to the COVID-19 pandemic in Amazonas

Local hospitals in Manaus, the capital of Amazonas state, have managed to increase their numbers of intensive care unit (ICU) beds, but unfortunately, mortality rates linked to the disease remain high.

MSF is responding to COVID-19 in Brazil. Teams have started working in the nation’s largest city, São Paulo, which is the place with most of the country’s cases of the disease.

The struggle of Venezuelan migrants and asylum seekers in northern Brazil

Thousands of people who have fled crisis-ridden Venezuela are now living in precarious conditions and struggle to find proper medical care in the Brazilian state of Roraima.