Our activities / MSF in the world / Bolivia
Get involvedDonate now 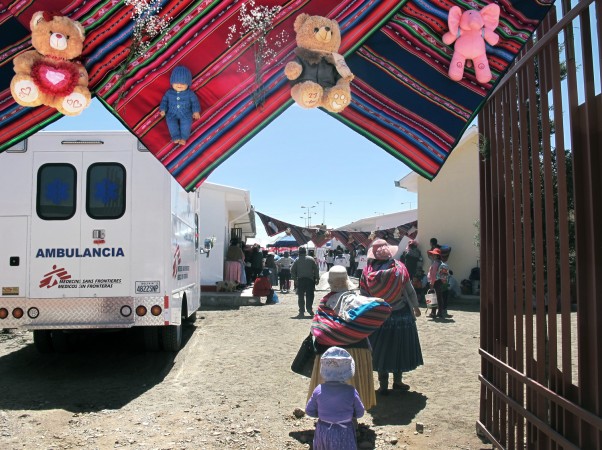 The official opening of the MSF-supported maternity ward of the Franz Tamayo health centre in El Alto brought together members of the community, authorities and staff. Bolivia, September 2019. © Yuri Fukushima/MSF

Bolivia is one of the countries with the lowest health indicators in Latin America. Despite increased investment in public health facilities in recent years, availability and quality of care remain poor.

The rate of deaths due to pregnancy and childbirth in Bolivia, for instance, is the worst in Latin America. Within the country, it is highest in La Paz department, specifically in the in El Alto municipality, which is adjacent to the capital city, La Paz. The municipality also has the largest adolescent population and, according to national surveys, almost a third of 19-year-old women are already mothers.

In 2019, Médecins Sans Frontières (MSF) opened a small sexual and reproductive health programme in El Alto. The project focuses on the local indigenous population, among whom teenage pregnancies and death during pregnancy and childbirth occur most frequently. In September, we opened a maternity ward in the city’s Franz Tamayo primary healthcare centre, and by the end of the year, our teams had assisted 54 births and organised 68 ambulance referrals to the centre.

The opening of a second maternity unit, in El Alto’s San Roque neighbourhood, scheduled for mid-November, was delayed until mid-December due to political unrest. In its first month of activity, the team at San Roque assisted 27 births.

We work in close collaboration with the Ministry of Health at both centres, with the main objective of reducing deaths during pregnancy and childbirth and improving access to safe births through high-quality, culturally adapted services.

At the height of the unrest, we continued with our sexual and reproductive health activities in El Alto and offered mental health services in a health centre in La Paz. We were in touch with several hospitals in case they were in need of any ad hoc support, such as medical supplies, which we provided to Senkata hospital.